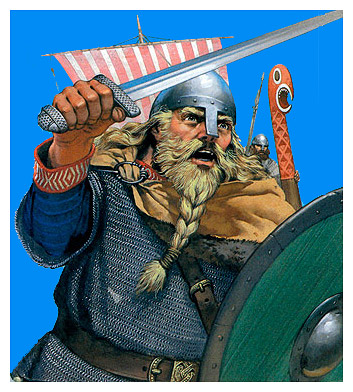 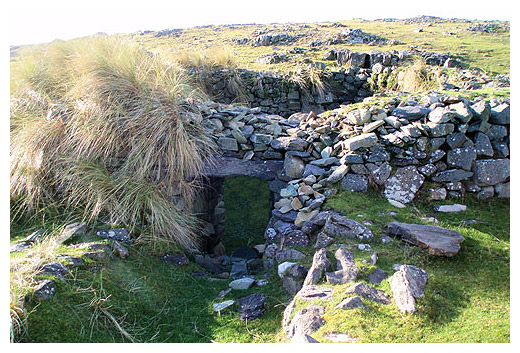 Raiding/Settling
Due to pressure of land, among other reasons, the Vikings began a general expansion overseas. From the annals, the first recorded Viking raid in Ireland was in 795 AD. This has been confirmed by other sources including poetry and sagas. They desecrated shrines and relics and captured slaves. Monasteries were a primary target because of their wealth and source of slaves. Skellig Michael was attached in 823. Inisfallen on Loch Lein, Killarney was also attacked. There was little activity west of the Shannon. Those who attacked Ireland came from western coast Norway.

The Vikings initially attacked coastal settlements but gradually moved inland. In 832 they raided Armagh Monastery three times in one month. In 839 they over-wintered for the first time at Lough Neagh. They also began a permanent settlement at Longphoirt, Dublin. In 980 Maésechnaill of the Ui Neill won a significant victory over them. Finished Viking independence in Dublin-followed by integration of peoples and styles as visible in later 10 century houses because of the influence of native crafts men. Brian Boru defeated the Vikings at the Battle of Clontarf in 1014.

Currency
Silver the currency of the age. The Viking used ‘hack silver’ – silver bars chopped up and used for trading. They introduced new trade routes into Ireland. They also introduced coinage here from the Islamic world. Among the interesting workshops we find in Dublin from that time are those working on walrus tusks from the Arctic. Dublin was also has a major slave market with slaves being gathered from Viking settlements, including Ireland and sold on to the Middle East. There is one account of 200 Vikings ships arriving in Dublin, full of slaves taken in Scotland.

Establishment of new centres of population
Prior to the Vikings population centres were very often around monastic settlements but the Vikings established new towns along the coast, Dublin, Waterford, Limerick, Wexford, Cork date primarily from that time. In Kerry places such as Ballylongford, Smerwick Harbour, Beginish and Dun Maine (Castlemaine) have Viking connections. A significant settlement was found in the caves at Clogher Mor – at junction between the Castleland/Killarney roads into Tralee.

Excavations
A major excavation took place at Woodquay, Fishamble Street in Dublin. Rectangular buildings with rounded corners and wattle walls were found. The remains of a Viking house which had a rune stone has also been found on Beginish Island in Valentia Harbour, County Kerry.

Crafts/Technology/Art
A wide range of crafts were practiced by the Vikings, including wood (native), metal, leather, walrus, silver and ship building. They also manufactured and ‘improved’ weapons. They altered the development of Irish Ecclesiastical art. Sapping the wealth of the monasteries led to abandonment of rich polychrome designs typified of the Ardagh Chalice and replacement of simpler styles like the Kells’ crozier.

Dublin was the melting pot for the fusion/intergration of Insular art and Anglo-Scandinavian motifs. This was later absorbed by the ecclesiastical to produce a hybred style later in late 11th to early 12th century. Urnes meets insular and presto the craft people made it their own.