The Neolithic Age – Lifestyle and Sites 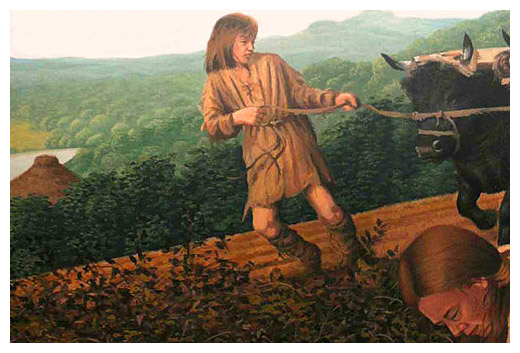 The Neolithic Age in Ireland dates from c. 4,000 – 2500 BC. The domestication of animals and cultivation of crops started first in S.E. Asia and N. Africa about 9000BC. Gradually farming, together with permanent settlements, pottery making and new tools for harvesting and processing grain spread across Europe – reaching Ireland nearly 5000 years later.

“Our first record of neolithic activity is at Ballynagilly in Co. Tyrone 5700 years ago” (Mitchell 1986). “We can be sure that the domesticated animals and plants involved in agriculture were imported to the island, since the wild progenitors of most of the species are not found here”. (Alison Sheridan from Irish Archaeology, Ryan 1994). Land had to be cleared and the large number of polished stone axes found from this period show how extensive this was.

Houses
Neolithic settlements in Ireland were adapted to the mild but moist climate at the time. Family units lived in rectangular houses and practised mixed farming. The walls of the houses were constructed of split oak timbers, set in trenches and held in position with small stones. These houses were used for short periods, perhaps a single generation.

Food
Remains of wheat, barley, sloes, blackberries, crab apples, hazelnuts have been found along with bones of cattle, sheep and goats also survive.

Household Goods & Tools
These include undecorated pottery, pottery bowls used for storage and cooking, tools of flint such as arrow heads, blades and knives. Polished stone axes adzes were used to clear woodland and for carpentry. Saddle guerins were used to grind cereals.
The Farm – Grain was grown in small fields. The fields would have been cultivated using digging sticks and simple ploughs, known as Ards. The grain would have been harvested using flint- blades sickles. Cattle and pigs would have grazed in light woodland, sheep and goats in abandoned cleared areas. Wild fruit would have been collected on the margins of the forests. The rivers lakes and sea would have been fished for salmon, trout, eels, flounder, whiting, cod. Shellfish would also have been collected. Dead buried in tombs.

Communications
In the heavily wooded environment communication was easier along rivers and lakes. Before the wheel – goods could only be transported on the backs of humans, oxen or by boat. The earliest boats were skin covered frames, ancestors to the currach, coracles or dug out canoes, such as that found at Lurgan, Co. Galway 2500bc.

Religion and Symbolism 3400-2800bc
People of this period developed complex religious beliefs reflecting their dependence on and familiarity of the natural world. Characteristically such beliefs relate to Natural spirits associated with water, trees and mountains, ancestral spirits. In this period we see these beliefs expressed in the great tombs and the associated grave goods, especially passage tombs.