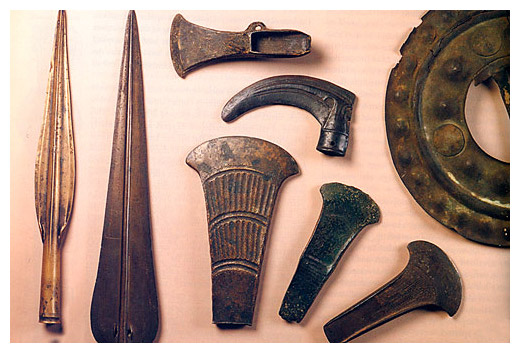 There were major changes in the Late Bronze Age. The rate of change also accellerated. A principle cause of this was the arrival of the wheel. Although Tutankhamen had a wheeled chariot in 1300 BC, the first evidence we have on the wheel in Ireland is in 1200 BC. The earliest wheel was a block wheel, made of three planks of wood pinned together.

What are the major changes at the begining of the Late Bronze Age?
1. From this time on we see a huge increase in the metal and metal technology. Most of the metal is imported – helped by the wheel. We also see the first roadways at this time, for example at Togher.
2. Between 1200-1000 BC there was a huge increase in deforestation which lead to a big increase in agriculture. This was to be a permanent change.

Describe the climatic change that took place at the start of the Late Bronze Age?
From dendrochronological evidence (the use of tree rings, mainly oak, to date objects and learn about weather patterns – in Ireland we can date back to 5289 BC) we know that there was severe cold weather between 1159 – 1139 BC. The year 1159 BC was when Mt. Hekla in Iceland erupted. A thin layer of ash has been found across the bogs of western Europe from this time. It marks the begining of 20 years of severe winter. In Scotland people moved from the highlands at this time. The climatic change also lead to an increase in the growth of bogs which lead to social and political change. There was also an increase in the amount and variety of weapons at this time – did the social unrest lead to more violent times??

Dwellings
Bronze Age houses seem to have been largely round in plan. Using upright posts sunk in the ground, mounted by cross beams and covered in thatch. The walls were probably made of wattles which formed a framework for a plaster of mud and straw (barley and other cereals were grown). Examples of this type can be seen at Lough Gur and Aughinish Co. Limerick. It is likely that most settlements were enclosed was posts and wickwork or stone – if it was readily available. The stockade would have been necessary to protect the sheep, cattle, goats and pigs and also to protect the carcases of game from predators.

Lake side dwellings have been found but with the change in lake levels it’s difficult to say if the dwellings were built in the lake or on old shores.

However, in this period, prominent hilltop locations were very common settlement sites. We have examples of this at Navan Fort, Co. Armagh (Eamain Macha); Dún Áilinne, Co. Kildare and at Tara, Co. Meath. Dún Aonghasa on the Aran Islands also dates from this period – 700 BC. These would have consisted of a non-defensive circular bank with an internal dyke. The number of rings around the fort seems to indicate the importance of the site, for example, Haughey’s Fort in County Armagh was a tri-vallate fort.

Fulachtaí Fia
These are the most numerous monument from this period. They are usually found in waterlogged areas. Water was boiled in wood or stone lined trough by immersing hot stones in it. The used stones were later thrown out to form the typical kidney shaped or oval mounds associated with these sites. Because of the lack of permanent structures associated with these sites there is a theory that they may have been used a hunting camps. There are a theories that they have been used for bathing or as sweat houses (musical instruments were found at these sites).

Metal Workings
Peter Harbison describes the Bronze Age as the “prehistoric industrial revolution”.
Weapons – As said earlier there was a large increase in the amount and types of weapons in this period. The most common type are rapiers (used for stabing rather that slashing or cutting), spear heads with hollowed end for shaft or handle –also lugs that migrate up to the tip in this period and some spear heads with small holes, possibly to make shrill noise as they went through the air). We also find swords and axe heads which have become more decorative and flanges replaced by the Palstave axe type with a socketed head.

Shields were also found from this period but some of what we find seem very large and unpractical. The shields were leather, wooden and metal. Interestingly, the ‘u’ and ‘v’ shaped found in the spirals in the design of the front of the shields in not found on British shields but can be seen on Scandanavian shields. This may be linked to the fact that Irish gold objects are found across Europe at this time. Metal bowls are also found in this period and two points to note about them is firstly that we see the use of rivets and secondly is the addition of lead to make the metal more ‘plastic’ or workable.

Musical Instruments
Ireland has the largest collection of pre-Renaissance musical instruments in the world. Included in this are horns (one date of 1000 BC), made to specific pitch from a sophisticated three-piece mould (the inner core was suspended by copper wire). Simon Dwyer has made a CD for the National Museum using these instruments. Crotals were also found. It’s not sure if these were suspended off horse’s harness or used as musical instruments.

Gold
Offaly and North Tipperary seem to be the main sources of gold in early Bronze Age. However, we don’t know where the later gold came from but we know it wasn’t Irish. Scandanavian amber beads, also found from this period show there was much trading in this period. Typical gold objects of the time include torcs (twisted open-ended necklace; lock rings which were worn on the hair; wrist bands similar to modern day arthrisis bands; gorgets (‘u’ shaped wide band with large discs at each end – worn around the neck; and dress fastners.

The Strange Disposal of Valued Objects
Many of the hoards of objects have been found where they were not meant to be retrieved. Gold ornaments, weapons, amber etc have been found in lakes and rivers and bogs. For example over 150 gold objects were found in a bog at Mooghaun, Co. Clare in 1854. In the bog at Cullen there have been 100 finds of gold objects. Were they offering to the gods so as to raise the prestiege of the donor?

Burials
We have no burials monuments from this period and we know very little about burial cermonies from this time. Why the change? We don’t know.

The End of an Era
There seems to have been the equivelent to the ‘Wall Street Crash’ at the end of the Bronze Age. Was it the coming of the Iron Age? – unlikely as this should have brought more prosperity. We now know there was no Celtic invasion as there are no archaeological facts to back it up and we also know the ‘Celtic Invasion’ theory only dates back 300-400 years. We don’t have a lot of evidence from the Iron Age, – no houses etc but we know there was a regeneration of the woodland.