Start/Finish: The walk starts opposite Moran’s Service Station on the Mail Road, Dingle.
Sat Nav: 52° 8’17.68”N / 10°16’13.19”W
Length: 6 km / 3.7 mi, allow 1.5 – 2 hours
Difficulty: Easy
Terrain: Unsurfaced path. Can be muddy in wet weather.
Gear: Comfortable walking shoes/boots
When to go: All year round
Wheelchair Accessible: No
Bicycles:  Not allowed.
Family Friendly: Yes, but be mindful of the cliffs.
Dog Friendly: No dogs allowed.
Stopping Points: These are only on the map and are not marked along the route.
Nearest Servicess: Dingle town
Car Parking: Ample car parking in Dingle town.
Ordnance Survey Map No: 70 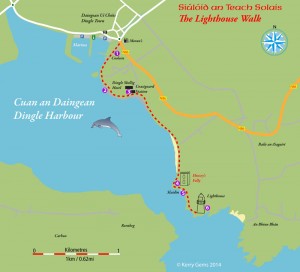 Introduction: This is an ideal walk if you want to stretch your legs and take in some sea air, along with some stunning scenery. The walk starts and finishes in Dingle town and follows the shoreline of Dingle Harbour to the picturesque Dingle Lighthouse. There are a number of interesting stopping points along the route, taking in the flora and fauna, sprinkled with some local history.

Before you start: There is a small car park close to the start of the walk at Cooleen and there is also ample car parking all along the quay. Our walk begins opposite Ó Moran’s Service Station on the Mail Road (Killarney/Tralee Road, N86). This is a linear walk, retracing your steps to this point. 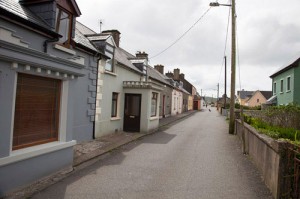 We begin our walk by walking through Cúilín (Little nook)/ Cooleen.  These neat little cottages were built by Lord Ventry to house local people he had moved from Reenbeg on the opposite side of the harbour.

At the end of the row of houses there is an entrance to Páirc Ghnó an Chúilín (Business Park). Our walk takes the path to the right-hand side of the wire fence, along the harbour wall. Where the fence ends, step down on the shore while passing a disused boathouse. Step up again on the grass path. A small stile, a structure which allows access through fences or walls, leads into a field. Cross the fields, staying close to the shoreline.

Along this section of the walk it is worth stepping down on to the shore to see some of the interesting seaweeds and shellfish. 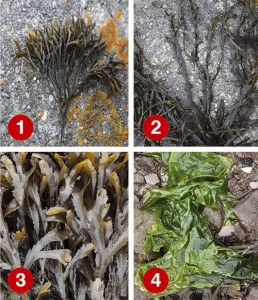 Seaweeds are a group of plants known as algae, plants that live in water and can vary from single celled to 60m long. Like land plants, they use sunlight to produce food (photosynthesis) but do not have roots, instead they attach themselves to surfaces by means of a ‘holdfast’. The different species have varying tolerance of the time they can spend out of water and so occupy different zones on the shore. Looking at the above photo, Channelled Wrack (1) is generally found in the upper zone, Egg Wrack (2) is found in the upper/mid zone, Serrated Wrack (3) is found in the mid/lower zone and Sea Lettuce (4) is found in the lower to sub-tidal zone.

Seaweeds have many uses: as a food source and in products such as beverages, desserts, salad dressings and in toothpaste, cosmetics and paints and as a fertilizer on the land, along with many other uses. 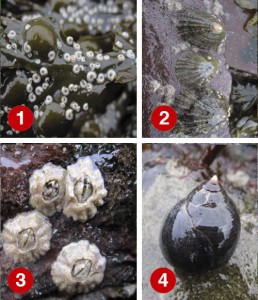 Continuing on our way, we pass the Dingle Skelligs Hotel and come to the Coastguard Station.

History of the Coastguard Service
The Coastguard Service was initiated as far back as 1822 and by 1837 there were fifteen stations in Co. Kerry. They were situated in the three districts: Tralee, which had five, Valentia four and Dingle six. The coastguards wore denim overalls of blue, with pillbox caps and were known as the ‘Blue Men’. 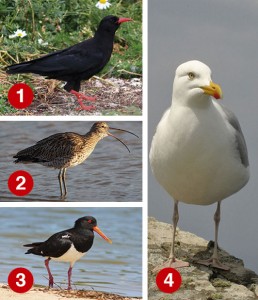 At the Coastguard Station we cross the road, go through the small stile and enter the field. Follow the shoreline toward our next stop, the tower, known as Hussey’s Folly. Along the path keep a look out for the plants pictured below. 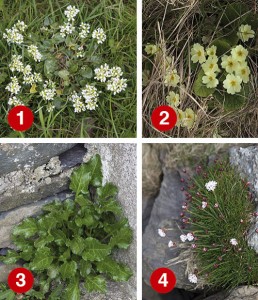 If the day is fine this is a good vantage point to sit a while and watch the comings and goings of the harbour. Some fishing boats will be returning home with their catch while others head for the open sea. The tower makes for an interesting foreground to photos of the harbour.

Hussey’s Folly, above, dates from 1845 and was built during the Great Famine (1845–’49) as a means of providing employment for the poor. It is named after the local land agent, R.M. Hussey.

Across the harbour is Eask Tower, built in 1847, another famine relief project. Built of solid stone and standing at 12m (40ft), its purpose was to alert sailors to let down their sails and round the mouth of the harbour safely. The tower was built at the instigation of Reverend Charles Gayer, a prominent  Protestant, in an attempt to win converts. 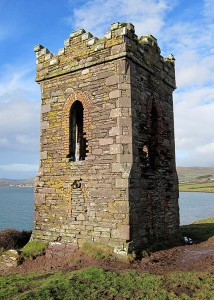 The area behind the Folly is used to feed cattle and can be muddy at times. About 50m further on is a little beach known as Slaidín. The slipway down to the little beach is interesting in that you can see the tracks worn by the iron wheels of the horse drawn carts, used to take sand and seaweeds from the shore. At one time this was a very popular bathing area with the locals, as is evident by the concrete seating.

It is also an excellent place to see a wide variety of marine life.

The rocky shore is a harsh environment. The plants and animals here contend with being submerged by lashing waves, exposed to the heat of the sun and at times, extreme cold. Take your time to examine the colourful life that lives in the rock pools. 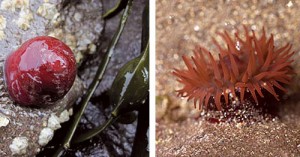 For example, the Beadlet Anemone above. This is the most common anemone found on Ireland’s seashores.  They are usually red in colour but there are also green and orange-brown varieties. Under water it opens to display beautiful tentacles that it uses to feed on tiny marine organisms. Look out for the blue bead-like warts at the base of the tentacles. When disturbed or out of water it closes and appears like a blob of jelly (above left).

There are a wide variety of shells to be found along the shore here. How many different shells and interesting things can you find? 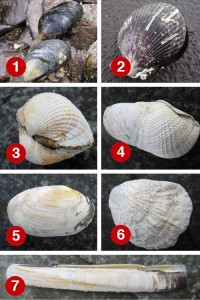 Purses of the Sea Witch 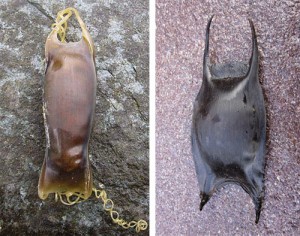 Mermaid’s purse (Sparán na caillí mairbhe) – These are the fertilized egg cases of the dog fish (above left) and skate (above right). The Irish name translates to mean ‘purse of the sea witch’.

They are made of collagen protein strands. Because they are lightweight, they are often found at the strandline, the farthest point of the high tide. The egg cases that wash up on beaches are usually empty, the young fish having already hatched out. 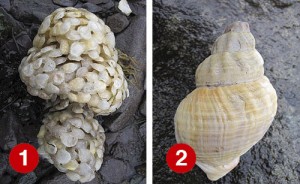 The eggs of the common whelk (above left), also known as ‘wash balls’ look like a mass of bubbles stuck together, each containing a number of eggs. In olden times they were used as a sponge as they produced a lather. Finding the shell of the Common Whelk (Buccinum undatum) cuachma, (above right) makes for a nice souvenir of your seashore walk. It is said that if you put the shell to your ear you can hear the sea.

Moving along on our walk, we leave the seashore and return up the slipway on the walking track. Turning right, heading towards the lighthouse, we cross a stone stile beside a gate. There are fine views overlooking the harbour entrance from here and it is also a good vantage point to see Fungie, the famous Dingle Dolphin. 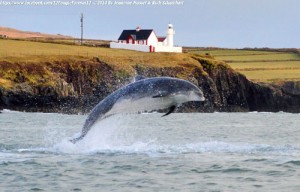 Named ‘Fungie’ by the local boatmen, the Dingle Dolphin has been entertaining and amazing young and old for the past 30 years. Now internationally renowned, he is Dingle’s No.1 citizen.

Up to ten ferries are employed to bring the hundreds of thousands of visitors to see him swim and play at the mouth of the harbour, creating a multi-million euro tourism industry.

Kevin Flannery, director of Dingle Oceanworld, described Fungie as a rare natural phenomenon, “It is unusual for a lone, wild dolphin to remain in the same place for such a lengthy spell, while interacting with visitors.”

Marine experts believe playful Fungie could still be under 40 years of age and could be a source of amazement for another 10-20 years. Regardless of his age, he is always available to welcome boats, trawlers and yachts to Dingle. A small cave under the cliffs at Burnham is thought to be his home.

As you arrive at the lighthouse the whole vista of Dingle Bay opens up before you. To the south is the Iveragh Peninsula and the famous Ring of Kerry. The pyramid-like islands at the tip of the peninsula are the Skellig Islands. Looking west there is a stunning view out along the bay. The lighthouse makes for a great foreground to photos of the Bay. 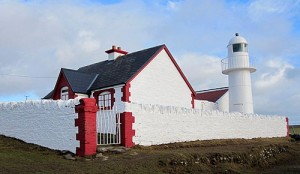 Completed in 1887 at a cost of £589, Dingle Lighthouse stands at the mouth of Dingle Harbour. The picturesque cottage adjoining the lighthouse tower has been unoccupied for over ten years. The automatic fixed red light is still functioning as an aid to shipping.

We have come to the end of our walk. From here we retrace our footsteps back to Dingle. It is possible to continue to walk along the cliff top but be advised that some parts of the cliffs are very exposed.

A Brief History of Dingle Harbour 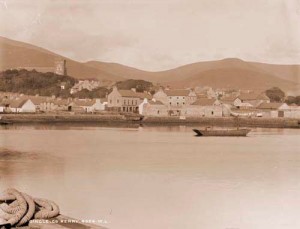 Given that there is evidence of human occupation on the Dingle Peninsula dating to over 6,500 years ago, it is safe to assume that the history of Dingle Harbour dates several millennia. Further proof, if needed, can also be seen in the number of Bronze Age tombs, Iron Age forts and the large number of Early Christian sites on the Peninsula. Even the name of the town is historic. In the Irish language

Dingle is known as Daingean Uí Chúis, meaning The Fortress of the Husseys, a Norman family who arrived in Dingle shortly after the Norman invasion of 1169 AD.

In 1257 King Henry lll of England passed a law placing custom duties on all goods exported through Dingle Harbour. However, it was in the 16th century that the harbour had reached it’s height of importance. Strong commercial links developed between Dingle and Spain. The principal exports from the town were wool, hides, salt meat, fish and butter.   The chief imports were wine, salt, coal and articles of clothing. Several of the houses in Dingle were built in the Spanish fashion, with ranges of stone balconies and marble door and window frames. The parish church of St. James is said to have been built by the Spaniards around the time of the great medieval pilgrimage to the shrine of St. James of Compostella, and was dedicated to St. James the patron Saint of Spain.

Fungie the Dolphin arrived at Dingle harbour in 1984, and there he has remained attracting hundreds of thousands of visitors to Dingle every year. Fish stocks have dropped off significantly over the years and Dingle now relies almost totally on the tourist industry.

We hope you have enjoyed the walk and found the information here useful. As always, if you have any comments to make please contact us at info@kerrygems.com