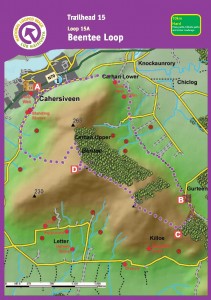 Before you start: The length of this loop walk, combined with rough and boggy stretches on Beentee hill and the accumulated ascent make it quite demanding, but the tremendous views from the top are very rewarding. To begin Beentee Loop walk, your starting point is the Fairgreen car park. You will find a mapboard located at the top of the park.

History to know: The town of Cahersiveen is laid out below, strung out along the estuary of the Ferta river. It is a relatively modern place in Irish terms: in 1815 there were only five houses here. The church was built in 1888 and paid for by emigrants in the USA. The keystone of the main arch came from Rome from the house of St Clement, who was pope in AD 92. The other large building in the town is the unusual former police barracks with its pinnacled tower, now the local heritage centre. Local stories relate how it was designed for the North West frontier of India, but that the plans got mixed up and it ended up here in Cahersiveen. The truth, however, is more prosaic: it was designed for the town in 1865 by E.T. Owens of the Office of Public Works in Dublin, who was clearly having a bit of an architectural fling!

A to B: Facing the mapboard, turn left and follow the purple (and red and blue) arrows along the roadway. The red and blue arrows are for longer loops. At a Y-junction veer right and continue past the water reservoir. After 1.5km the loop joins an old mass path, used in the old days as a short cut to the church in Cahersiveen for rural folk, through Carhan Upper. Mass paths are rare; most of them in Ireland have now disappeared.

Different varieties of trees are named with little signs, and there is also a sign telling us that in a glade below the path is a holy well called Tobar na Mban Fionn, or the well of the fair-haired women. After 2km the loop joins a tarred surface at Gurteen – exit via the stile and continue straight ahead.

B to C: After a very short distance on the tarred road watch for the waymarker where the blue loop proceeds straight – but you turn right and cross a stile following the purple (and red) arrows. Now the loop ascends steeply along the edge of forestry. Watch out for the Irish mountain hare in this area: they are big animals, indeed their Irish name is Gearr Fia or short deer. It is one of the longest established examples of Irish fauna: the remains of one excavated in County Waterford dated from over 28,000 years ago. At the top of the steep ascent turn right and onto the ridge toward Beentee.

C to D: The route along the ridge follows ditches and wire fences – the views from the ridge and summit at Beentee are spectacular. On the main summit at 376m there are extensive views all around. To the west is the 12 km long island of Valentia, connected to the mainland by a bridge at Portmagee, and to the south west in clear weather the two Skelligs are in view, on one of which an amazing monastery was built in early Christian times.

To the south, Ballinskelligs Bay stretches between Bolus Head and Hogs Head. To the north is our goal, the town of Cahersiveen. The summit is featureless except for a small cairn of slate rock, with carved initials of earlier visitors: the clearest seems to be dated 1863. Shortly after passing the summit you reach a wire fence which the red loop crosses – but you follow the right side of the fence for 100m before turning right and starting the descent back to the town.

D back to A: The descent to Cahersiveen is by hillside paths and an old laneway – the final section back to the town by a back road. Along the way down look out for Beentee’s herd of feral goats with their fierce horns and long dirty coats: you may well smell them before you see them! Turning away from the forest the route goes steeply downhill to reach meadow fields and eventually the public road at Garranebane. The route now turns right and, passing a fine prehistoric standing stone in a field on the left, enters the town by way of Top Street. The start of the walk is now a few hundred metres to the east.

Finish: We hope you have enjoyed the walk and found the information here useful. As always, if you have any comments to make please contact us at info@kerrygems.com.