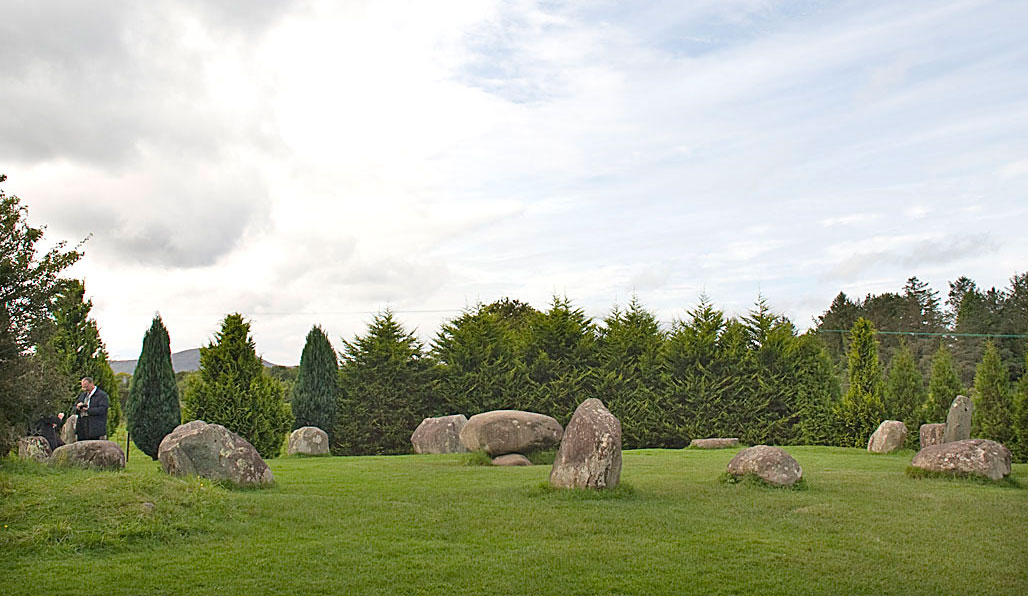 The Bronze Age Proper can be further sub divided into the following;

In the Neolithic period the climate was warmer and drier and suitable for the growing of wheat and other crops. Farmers favoured the uplands where the soil was lighter – 85% of Ireland is less than 500 ft in height. However, c.2000 BC the climate got colder and wetter. This, combined with the intensive farming on light soils which caused the leaching of minerals from the soil, poor drainage and erosion lead to the formation of peatlands, giving rise to raised bogs and blanket bogs. A good example of this is Lough Bouragh which disappeared under bog at this time.

Henges
One of the best preserved of these is in Dowth, Co. Meath and at Ballynahatty in Co. Down. They are generally found in east Leinster and the NE of Ireland. These are circular enclosures where the material is scooped out from the centre to make the walls. They date from c.2000 BC. The finds include Beaker pottery.

Stone Circles
At Loch Gur the stone circle may have originally being a circle of wooden posts. It should be noted that stone circles are not true circles but are more pear shaped. They were built between c.2000-c.1100 BC. They are not usually associated with burials. They are aligned with the sun. It could be possible that the builders of stone circles were seen as very powerful or magical people because some may have believed that the sun aligned with their circles rather than visa versa. In Ireland most of the stone circles are found in the Kerry Cork area. Good examples can be seen at Kenmare, Drombeg, Co. Cork and L. Gur.

Interestly, Scottish stone circles are orientated on the moon – it appears to ‘roll on’ the recumbent stone. It’s obivous that these early people had a good knowledge of the skies.

In Brittany there are huge stone circles and stone alignments. These people were sharing ideology with the Irish.

Stone Alignments
These date from the same period as stone circles (2000-1100 BC). These were aligned with the stars. There are over 170 stone rows in Cork and Kerry. Over half of these consist of no more than 2 stones. The larger circles have 3-6 stones. The length of the row can vary from 2m-13m and the height of the stones can vary from 1m-4m. They are generally aligned in a NE/SW axis. Thus aligning them with the sectors of the heavens in which the sun rises and sets in the winter time and sharing a common orientation with the stone circles(??). The 600 or so slab-like monoliths in the Cork Kerry area have a similar orientation.

They are generally found in upland areas of well drained soil, indicating that the builders of these may have been raising cattle and growing cereals. Stone circles, stone rows and monliths are also very much associated with the copper mining areas and possibly date from the same period.

Burials in the Bronze Age

In this period we have more items placed with the corpse. Also, in the Neolithic period the tombs were communinal whereas in the Bronze Age tombs are individual. The two main types are cist tombs and wedge tombs.
Cist Tombs (cist ~ Greek for ‘box’) – mainly found in eastern side of Ireland. They are mostly underground with no marker. Typical find would be the body in the fetal position and a beaker of food placed alongside it. It could be that more cist graves are found in the east because the land is better and there would be more ploughing activity.

Wedge Tombs
These are found mainly in the west of the Cork-Derry line, with a concentration in the Wicklow area. There are two types, Northern Wedge and Southern Wedge. A good example of a Northern Wedge is at Island, Co. Cork. An example of a Southern Wedge tomb is Baurnadomeeny in County Tipperary. With the wedge tomb there is continuous access, the entrance is wider and higher and it inner passage narrows and drops in height, pit at rear for cremation. Wedge tombs always face west (‘w’ for wedge and west). Most court and portal tombs face east. Passage tombs face south east. At Toormore, Co. Cork we have an example of Allées couvertes, very similar to tombs found in Brittany, France.

From 2000 – 1500 BC, pottery changes in use from accompanying the dead to containing the dead. These urns are typical Early Bronze Age. The ‘collared urn’ is typical of North Leinster and South Ulster. Encrusted Urns has decoration applied to them by the addition of pieces of clay. There are also pit burials where the cremated remains are placed in a pit or ditch with the urn updie down over the remains. It seems people picked out the bones from the cremation. It may be that they floated the lot in water and skimed off the charcoal. Some of the bones have a weathered appearance – where they out in the open for a period, exchanges between families or tribes??? The lack of weapons in the graves doesn’t mean they were a more peaceful society – think of those buried in the recent world wars!!

Development in Metallurgy
As the Bronze Age progresses so too did the skills of the metal workers. From making flat two-dimensional objects they began to use two piece mould that had a central core to produce implements and weapons with a central socket such as spearheads. The mould also became more decorative. Flanged axes gave way to Palstave axes.