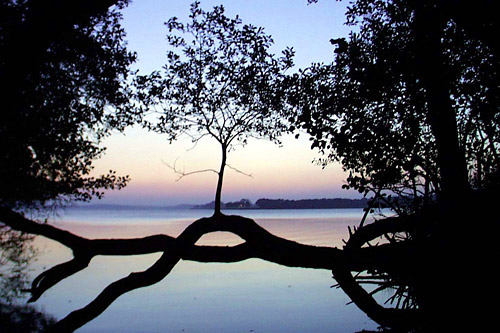 They say that “Kerry has little climate but gets a lot of weather”. This is quite true in fact. Overall the climate (temperature, sunshine and humidity) vary little here over the year. The Gulf Stream which comes up from the Gulf of Mexico washes the shores of Kerry with warm waters. Some people here swim in the sea all year round as the temperature varies little, reaching a low of about 8 degrees Celsius in March to a high of 16 degrees in August. Mind you, a winter swim here is one way of getting a real appreciation of Irish Coffee (made from coffee, boiling water and Irish whiskey – topped with fresh cream).

This mild climate has a huge effect on the landscape of Kerry – everything and everywhere seems to be green. The fact that we rarely get severe frost and little or no snow means that many plants grow unchecked all year round. An excellent example of this marvellous growth can be seen in the Killarney oakwood where every rock and every stone seems to be covered in mosses, lichen and liverworts of every description. Another example of our mild climate can be seen at Glanleam Gardens on Valentia Island. Here sub-tropical plants thrive thousands of miles from their origin.

You may have already heard of Valentia as it is the name of the meteorological station in the county. Although named Valentia Observatory it actually moved from Valentia Island in 1892 to the nearby town of Caherciveen. Reports from Valentia can be heard daily on world shipping forcasts and are an ideal way to hear the weather report from Kerry before you leave home. When in Ireland detailed land and sea area forecasts are available from our national radio, RTE 1 (89 FM) at 6.33 a.m., 12.53 p.m., 6.24 p.m. and 11.55 p.m.. Hourly local forecasts are available from Radio Kerry (97 FM).