The best birdwatching locations around the county. 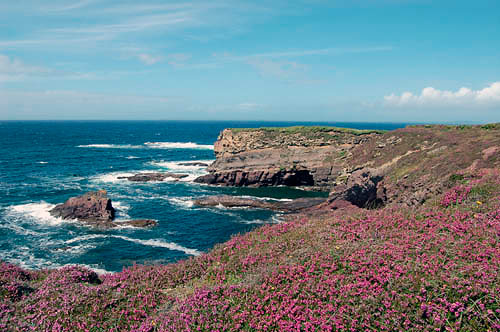 North Kerry Coast
In autumn and winter, a variety of estuary and coastal birds can be found along the shore of the Shannon from Beale Point to Tarbert, mainly Wigeon, Teal and other wildfowl including Brent Geese, and good numbers of the regular seabirds, waders and gulls. 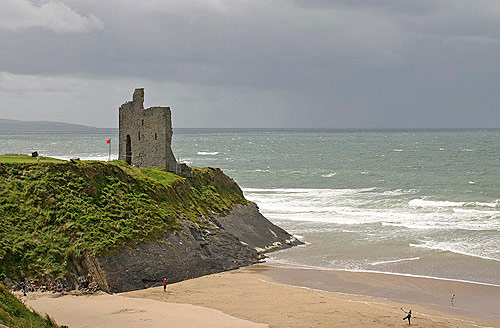 Cashen Estuary
A large estuary, best in autumn and winter for a variety of waders and wildfowl, including large numbers of Golden Plover. The Cashen attracts a good variety of wintering birds including a large Whooper Swan flock, and is a regular haunt of a small flock of Greenland White-fronted Geese. It is excellent for waders in autumn, including Nearctic vagrants. 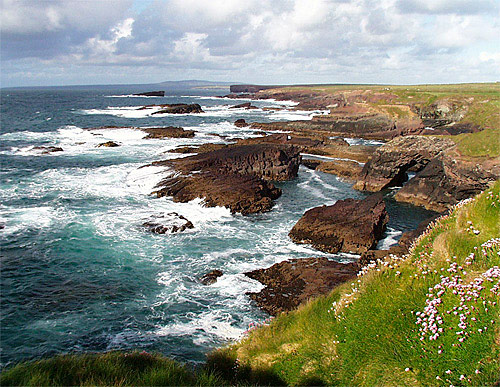 Kerry Head
A good seawatching headland in autumn in NW or W winds. Look for large numbers of passing seabirds in autumn during strong onshore winds. 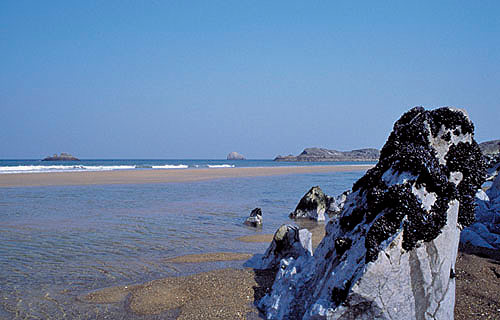 Estuary birds, particularly good in autumn for shorebirds such as Dunlin, Golden Plover and Grey Plover and other waders, but time your visit to within two hours either side of high tide or you will only see a fraction of the birds. Little Egret is regular in wet channels. 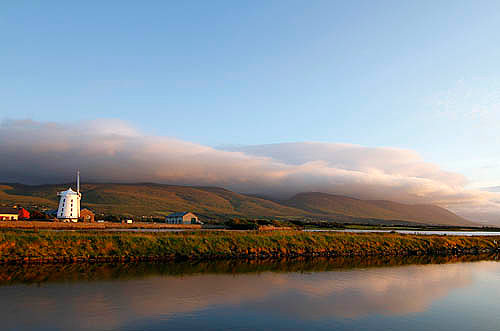 An outstanding area for large numbers of waders and wildfowl in autumn and winter, with a long history for attracting rare birds, particularly rare North American waders in September. Golden Plover, Dunlin and Lapwing flocks often number over a thousand, while Teal, Wigeon, Bar-tailed Godwit, Black-tailed Godwit, Knot, Redshank and Oystercatcher all number in the hundreds. View the mudflats from near the windmill and between there and the Tralee Bay Wetlands Centre east towards Tralee.

An estuary with large numbers of waders, including thousands of Brent Goose in early winter and one of the most reliable sites in Kerry for Spotted Redshank in winter. Wigeon, Teal and Mallard are also common along with a range of shorebirds such as Curlew and Redshank. 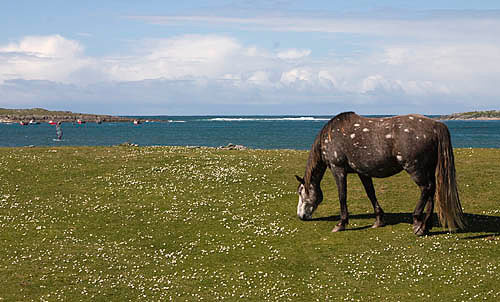 The peninsula north of Castlegregory is good for waders in autumn and winter, and occasionally attracts large numbers of gulls. Several hundred Ringed Plovers and Sanderling can often be seen on the sandy beaches and the rocky, seaweed covered shore is one of the best places in Kerry to see Purple Sandpipers. 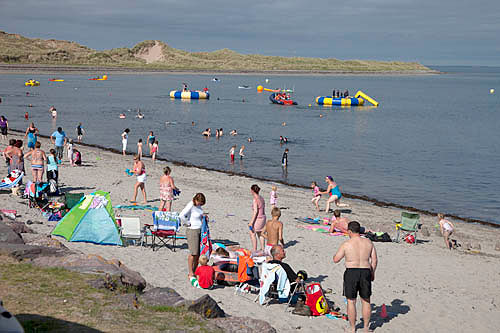 A large, shallow coastal bay, very good outside the summer months for Great Northern and Red-throated Divers and wildfowl, including large numbers of Brent Geese in mid-winter. A good site to see the rare Slavonian Grebe offshore, and Black Guillemot and Red-breasted Merganser can also be easily found. 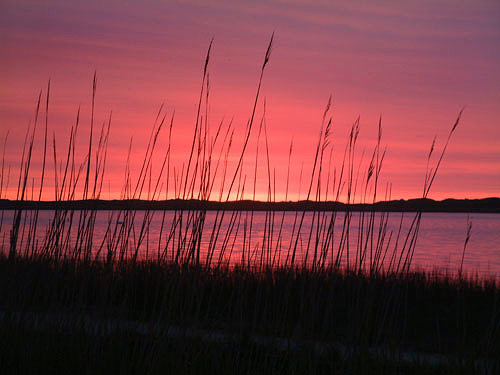 A large freshwater lake and reedbed, good from late autumn to early spring for Whooper Swan, Scaup, Teal, Wigeon and other wildfowl. In summer, Reed Bunting and Sedge Warbler are common. View the lake from the east side, signposted from the outskirts of Castlegregory. 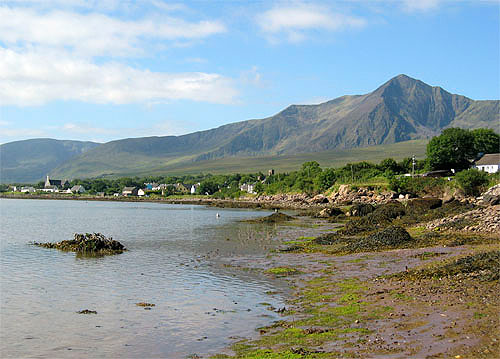 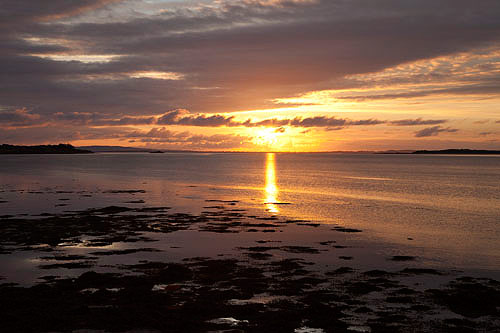 With suitable winds, one of the finest seawatching locations in Europe. Pick an autumn day with a strong west or north-west wind and you may be lucky to see thousands of seabirds passing, including shearwaters, petrels, skulls and the rare Sooty Shearwater from the South Atlantic. Chough, Kestrel and Peregrine can be seen soaring along the cliffs in summer and Fulmars are present all year. 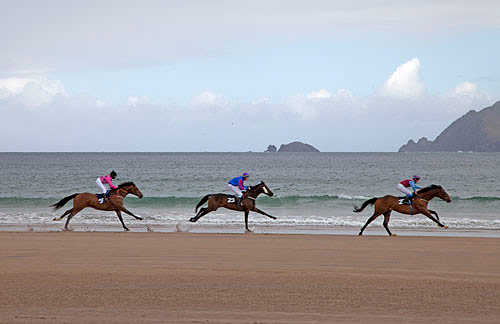 The eastern half of Smerwick Harbour has sandy beaches and a large reedbed which attracts small numbers of waders, gulls and duck throughout the year. This area is particularly good in autumn and winter, and with a reputation for attracting rare birds. 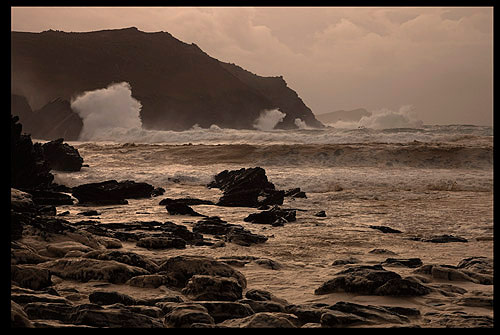 A good seawatching location in south-west, west or north-west winds from late July to October. Gannets, Kittiwakes and Fulmar can be seen year round, and dolphins and even whales are sometimes seen offshore. 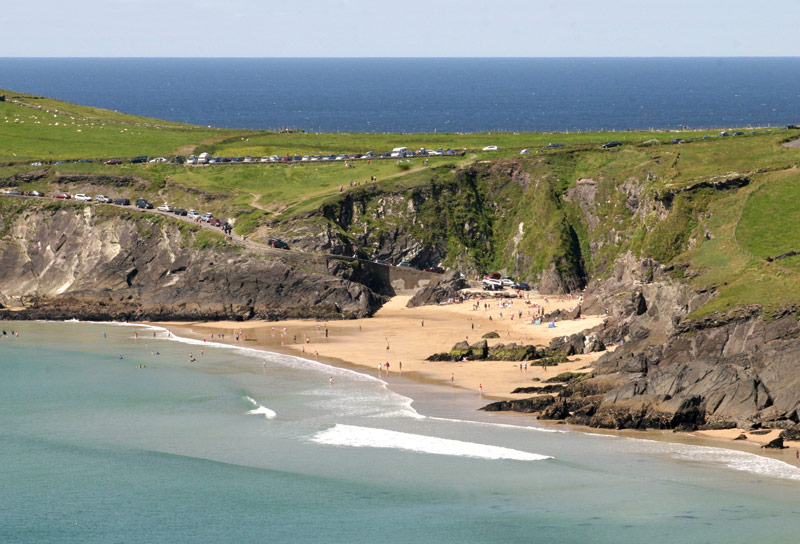 Two adjacent sites, good for migrants in autumn and a good area for Chough all year. Some very rare European and North American migrant birds have been recorded here, especially in September and October. 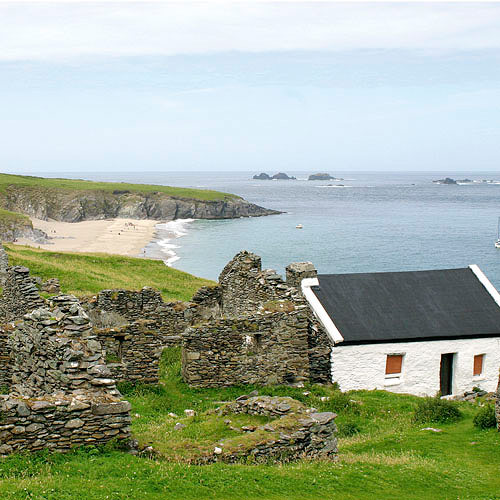 Seabirds can be seen throughout the summer, and Black Guillemot is commonly seen from the ferry. Occasional rare migrants are recorded in spring and autumn and the scenery is truly unforgettable. Ferries go from near Dunquin and from Dingle, from May to mid-September. There are no ferries in winter. 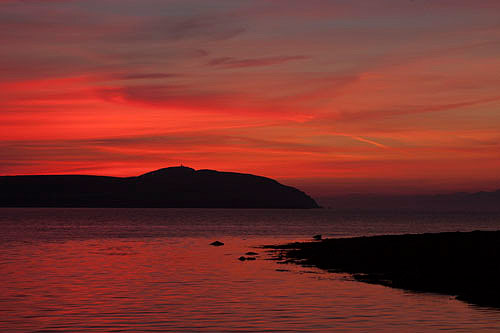 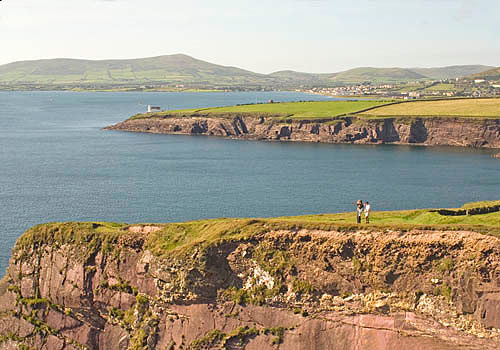 A very good site for gulls and small numbers of Brent Goose, Wigeon and waders throughout winter. Little Egret and Black Guillemot are present all year (the latter breed in the harbor walls), and large numbers of gulls often gather, especially when trawlers are offloading their catch. 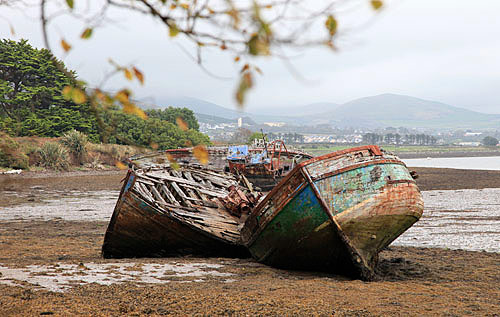 A sheltered woodland and estuary site, just west of Dingle, good for Little Egret and waders outside the summer months, and woodland birds, especially in May and June, when Spotted Flycatcher and Blackcap breed. 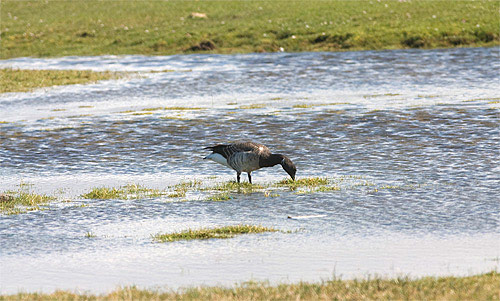 An estuary 3km east of Dingle, with a good variety of wildfowl, waders and gulls, especially in autumn. One of the best sites in Kerry to see Kingfisher, especially at the eastern end of the estuary. 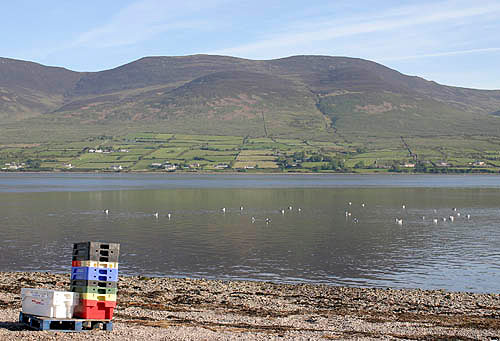 A huge estuary with large numbers of wildfowl, especially Brent Geese and Wigeon, and high numbers of waders and gulls, in autumn and winter. The only regular site for Pintail in Kerry. This whole area can host up to a thousand or more Brent Geese, hundreds of Wigeon and thirty or so Pintail each autumn and winter, along with many other wildfowl and waders, but the birds are often distant. Try to time your visit to about two hours before high tide, especially Inch and Rossbehy. On the seaward side, there can be hundreds of Common Scoter, and many divers and other sea duck present in autumn and winter. 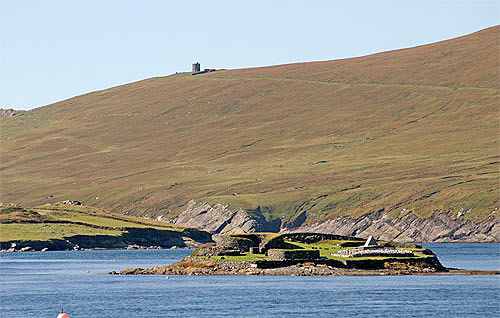 A good seawatching site, best in autumn in strong south-west winds. Many Gannet, Fulmar and Manx Shearwaters can sometimes be seen. Wheatear is common in the area in summer. 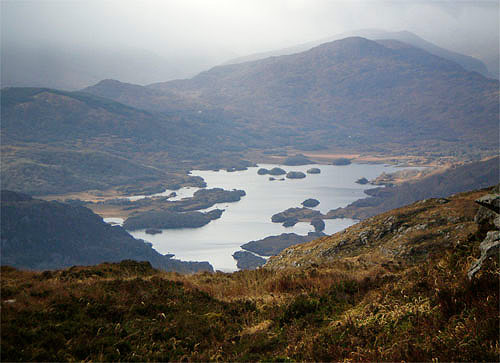 Extensive broadleaved and mixed forest set among beautiful lakes and the highest mountains in Ireland. Particularly good in spring, with a wide range of typical Irish woodland and upland species, wildfowl in winter, and White-tailed Sea Eagles from the recent reintroduction scheme. Torc Waterfall and Brickeen Bridge are particularly good areas for general woodland birds, including Long-tailed Tit, Jay, Blackcap and Spotted Flycatcher. 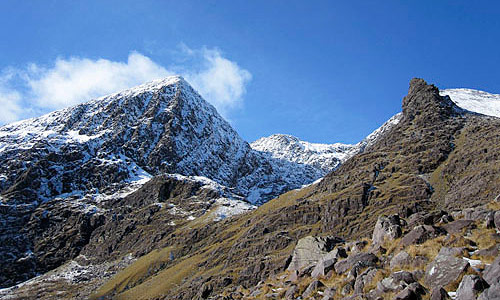 The highest peaks in Ireland and one of only a handful of areas in Ireland where it is possible to see Ring Ouzel in summer. Chough and Wheatear are also present and in winter, Snow Buntings can be found in small numbers along the highest ridges. 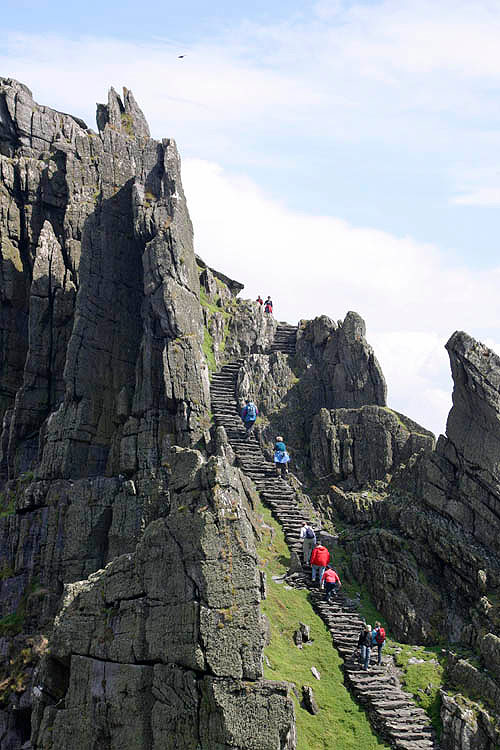 A remote, rocky island with ancient monastic buildings and large numbers of seabirds, all of which make for a truly spectacular experience, not to be missed. Puffins are common, while Fulmar, Kittiwake, Guillemot, Razorbill and several species of nesting gulls are all easily seen. The boat trip out is just as spectacular, as you pass close to Little Skellig, home to almost 28,000 pairs of nesting Gannets. Boats go in summer from Portmagee, Knightstown (on Valentia island), Caherciveen and Derrynane. 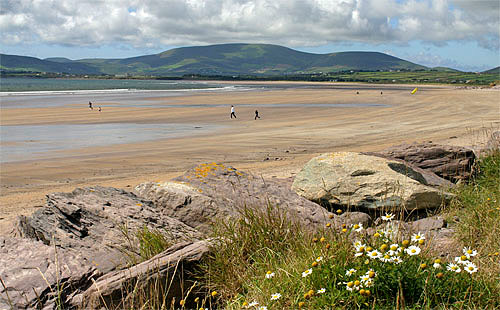 A large estuary, best in autumn and winter for waders and wildfowl. The Inny is difficult to view well, though there is a good viewpoint at the southern end, and is best visited at anything other than high tide. Terns can be seen offshore in summer.