There are times when it’s good not to be at the centre of things. When you stand on a cliff top in Kerry you are at the edge of Europe, nothing before you but thousand of miles of the Atlantic Ocean. This is place of great natural beauty, tranquillity and genuinely friendly people. Seo é Ríocht Ciar – this is the Kingdom of Kerry – a very special place.

So what’s so special about Kerry? Like many other holiday destinations it has lots to do and see with the highest standard of accommodation and first class restaurants. However, it’s the things that are unique to Kerry that make it such a popular visitor destination.

“A Kerry footballer with an inferiority complex is one who thinks he’s just as good as everybody else.” 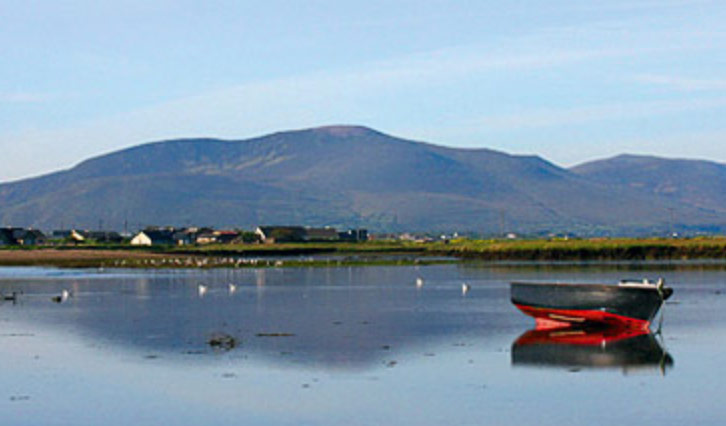 Earth Shattering
The discovery of tetrapod footprints on Valentia Island in 1993 took the history of Kerry back 365 million years. This was a time when Ireland was south of the Equator and you could have walked into Philadelphia, USA. Kerry owes much of its inherent beauty to dramatic geological phenomena. Movement of the earth’s plates gave us the lofty Crúacha Dubha (McGillycuddy Reeks), Ireland’s highest mountains. Major volcanoes created the stunning scenery of the Blasket Islands, while massive glaciers carved out the Gap of Dunloe and the magnificent lake-filled Killarney Valley.

The Kerry Gang
But it’s not just plants that are special to Kerry. The county also has its own unique fauna — for example, the Kerry slug, the Kerry Blue dog and the Kerry cow. The Little Skellig Island off our coast is the second-biggest gannetry in the world. We won’t rub salt in the wounds by mentioning that Kerry also has the European headquarters for the lesser horseshoe bat.

Good News for Botanists
As the ice retreated, the landscape took on a green mantle of woodlands. Much of this has been cleared by man over time. In Killarney National Park, we can see the last of Ireland’s great oakwoods and one of only three remaining yew woodlands in Europe. The warmer climate, helped by the Gulf Stream, encouraged plants from sunnier latitudes to settle here. Lusitanian flora from the Mediterranean such as Arbutus (arbutus unedo) and the greater butterwort (pinguicula grandiflora) can only be found in Kerry, West Cork and very few other places in Ireland or Britain. Little wonder then that the distinguished naturalist Lloyd Praeger described the area as ‘a paradise for the botanist’.

Walking through History
Ok, the county has this unique flora and fauna, but has it got a rich history? Well, maybe. We do have 5,000 year-old passage tombs on the tops of several of our mountains and we have the 4,200-year-old copper mines in Killarney – the oldest in western Europe. Does that count? We have evidence of people living at Ferriter’s Cove in the Dingle Peninsula over 6,500 years ago, where, by the way, the earliest record of cattle in Ireland was found. It is only fair to mention that the monastic settlement at Skellig Mhichíl, the finest example of an Early Christian settlement in Europe, is one of only three UNESCO World Heritage Sites in Ireland.

The Write Stuff
Kerry’s writers have penned their own lasting impression. John B Keane and a nest of writers in Listowel, along with writers in the Irish language from the Great Blasket Island have become international best sellers.

Getting their Kicks
Of course, the most important element of any county or place is the people. And there is nothing that brings out the pride and passion Kerry people have for their county quite like Gaelic football. With a record-breaking 36 All-Ireland Championship victories notched up – the latest in 2009 – they have repeatedly proven they are the kings of the country’s most popular sport.

Clear the Chairs
Apart from Gaelic football, another part of Irish culture in which Kerry plays — excuse the pun — a central role is traditional music. In the poor mountainous lands of East Kerry we find a rich vein of composing and playing on fiddle, pipe and ‘the box’ (accordion). The lively local slides and polkas of Sliabh Luachra re now popular throughout Ireland.

Pádraig Kennelly, a wise, learned gentleman and proprietor of the county’s Kerry’s Eye newspaper, has a favourite mantra: ‘A day out of Kerry is a day wasted.’ And he’s right.

Welcome to the Kingdom!