A birdwatching guide to Kerry

Kerry is a large and ornithologically diverse county, with wide range of habitats, from the highest peaks in Ireland to numerous large wetlands, estuaries, headlands and islands. The Killarney National Park also has some of the best upland and woodland habitat in the country.

Tralee Bay, Blennerville, and the outlying estuaries of Barrow Harbour, Carrahane and Akeragh Lough together comprise one of the largest waterbird communities in the country – an outstanding area for birdwatching, particularly in autumn and winter.

The Dingle Peninsula has a great variety of habitats, with several excellent estuaries, bays, lakes and seawatching headlands while unusual migrants also occur in autumn, around Dunquin on the western tip.

The Ivearagh Peninsula also has a series of estuaries and headlands with the potential to produce many interesting species, particularly in autumn, but it remains one of the least known birdwatching areas in Ireland.

Offshore islands, most notably the Blaskets and the Skelligs, together hold some of the largest and most spectacular seabird colonies in Europe, and a summer visit to these bird-rich areas is always memorable.

Look out for the new Dingle Peninsula Bird Report which covers all bird sightings of note from January 2011 to the end of December 2013. Among the exciting discoveries during that time were the first records in the area of a Buff-belied Pipit from North America and a Blyth’s Reed Warbler from Scandinavia or eastern Europe. Several short articles are also included, one covering the latest developments in the Kerry White-tailed Eagle Reintroduction Project , and another shows us some of the findings from the colour-ringing of Brent Geese in Kerry, tracking their migrations all the way to the Canadian high Arctic. There is also a summary of the spread of Little Egrets in Kerry over the past 20 years. Illustrated throughout by beautiful colour photos, this is a must-have for anyone interested in birds not just on the Dingle Peninsula, but throughout Kerry and beyond.

The Report is available in Ventry Post Office and The Dingle Bookshop, or see www.kerrybirding.blogspot.ie for details of how to order it by post.

We would like to acknowledge the assistance of Michael O’Clery in supplying the text and some images (where credited) for Birdwatching in Kerry. Michael is a wildlife artist and bird illustrator living in the Dingle Peninsula. He has over 30 years of experience of birdwatching and is a regular contributor to books, magazines and the internet. See details at his blog:  www.michaeloclery.blogspot.ie

The text here is distilled from ‘Finding Birds in Ireland – The Complete Guide’, by Eric Dempsey and Michael O’Clery. For more detailed information on all these Kerry sites and more, see their book which is available in bookshops, or online at www.gillmacmillan.ie 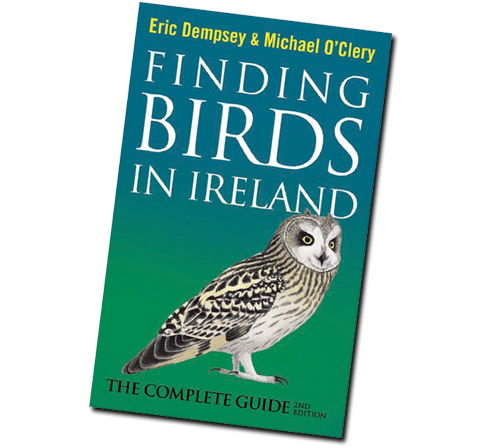